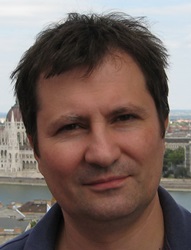 Nikola Vojvodić, MD, PhD, was born in 1969 in Belgrade. He graduated from the Faculty of Medicine in Belgrade in 1994, with an average grade of 9.26. He defended his Master thesis "The Significance of CAG Trinucleotide Repeat Number for Onset, Clinical Course and Differential Diagnosis of Huntington's Disease" in May 1999, and finished his specialization in Neurology in October 1999. As of June 2000 he has been employed at the Clinic for Neurology in Belgrade. In December 2012, he defended his PhD thesis entitled "Analysis of periictal vegetative signs for localization of epileptogenic zone in temporal lobe epilepsy". In July 2014 he was appointed as a Lecturer of Neurology at the University School of Medicine in Belgrade. His book "Temporal Lobe Epilepsy" was accepted as a distinguished monograph of national importance by the Scientific Council of the Medical Faculty in Belgrade. He is currently working at the Department for Epilepsy and Sleep Disorders. He is a member of the Association of Neurologists of Serbia, the European Association of Neurologists and the Association of British Neurologists.